A lot can be said in two words – words that can hurt you or words that can lift you up. I’ve been the recipient of both, as I’m sure you have as well.

Years ago I was going through a very tumultuous time in my life and in my marriage. Everything seemed to be spiraling out of control. I admit I was not spending time with God – at least not quality time. I was still going to church, still singing  in the choir and going through all the motions, but my personal relationship with my Heavenly Father was one-sided. I was restless and attempting to control things myself (or so I thought).

One night I was awakened during the night only to find our bedroom completely engulfed in smoke. At first I thought the house was on fire, but there was no smell of anything burning. It was just a heavy layer of smoke or fog. There was a feeling in the room of heaviness and a sense of foreboding. I immediately recognized the work of the enemy encroaching upon me – seeking to gain a stronghold in my spiritual life. And of course, I had left the gate wide open by not being in God’s word and in prayer. I sat up in bed – Mike remained asleep next to me – and I just simply spoke the name “Jesus“. The smoke immediately parted as if someone had a vacuum on each side of the room, pulling the forces back to where they came from. There was an immediate feeling of peace, and it was in that silence and peacefulness that I heard it. God’s voice – speaking two words to me – “be still“. 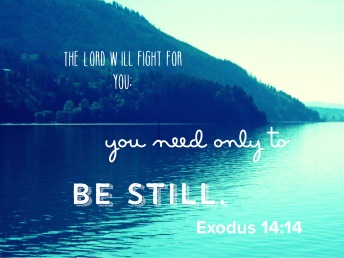 God had spoken to me in many ways – through His Word, through dreams, through other people, and in my heart, but never out loud. And He didn’t need to say “Be still and know that I am God“. I knew it was God! Those two words have been food for my emotional soul on so many occasions and through some very tough journeys. It is my reminder to rest in Him, to know of the assurance that He’s got me, and He has my circumstances already in His vision. It’s trusting Him that He’s fighting the battle, and the only thing I need to do is to “be still“…

This site uses Akismet to reduce spam. Learn how your comment data is processed.